Govina has been working his ass off to bring his vision to life for more than two and a half years now and the shootings, which mostly take place on weekends, are still in full steam.

Nostromo is a no-budget guerilla film, unsupported by any film funds or distributors – with a devoted crew that creates its props and costumes mainly out of things other people would throw away. The film is as guerilla as guerilla filmmaking can get, breaking into locations, shooting and getting out fast, having meals of bread and cheese, relying mostly on Canon 5Ds and 6Ds cameras and using on location available light – or flash lights to light the sets.

With Ben Frisch being the director of photography, I had the pleasure of being one of the cameramen on Nostromo.

The Story of Nostromo
Ephialtes finds himself in the midst of a dryland – having no memory of who he is or how he got here. He finds other survivors, most of them being more dead than alive and covered in rags, wearing gas masks.
This post apocalyptic society is being suppressed by a fascist-like regime called the Diarchie.
Ephialtes learns that this organisation is ruled by a mysterious machine, whose purpose is unknown – even to its own watchmen.

Mirjam Ruschka, the costume designer, spent months collecting the materials, sewing the costumes and modifying old gas masks for Nostromo. Below you can see some production stills from Nostromo. 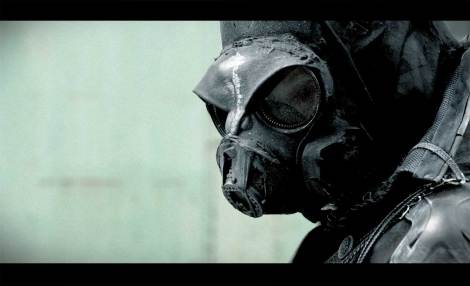 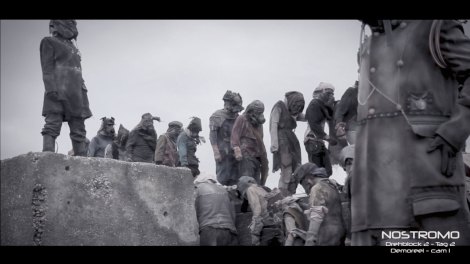 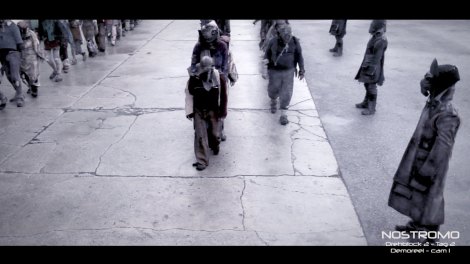 Coming up in one of the next posts:
A no-budget shooting in the deserts near the tunisian-algerian border.

3 responses to “Nostromo – A Postapocalyptic Journey”