Some years ago I was playing around with this idea of getting together some athletes, putting them in barbarian or creature costumes and make up and shoot a short that would play in the world of Conan the Cimmerian. Not the modern Conan, but the old one – the good one! The death-defying brute. 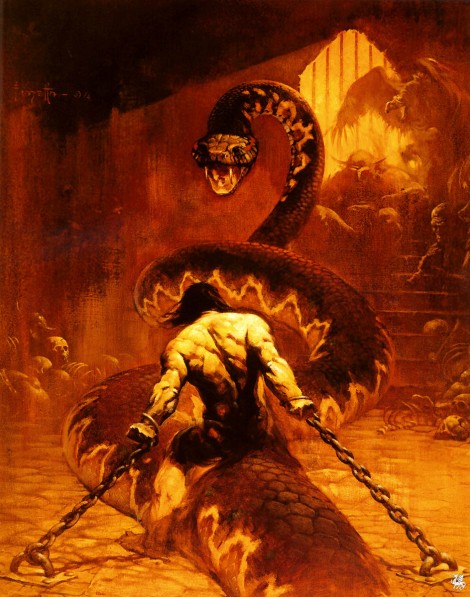 Conan the Usurper by Frank Frazetta

So I asked Markus Weilguny, a friend of mine who knows a ton of people, whether he knew some bodybuilders who were also actors, or who had an interest in acting. Markus told me about a professional wrestler he had met someday and I asked for his contact details.

To put a long story short: As I was very busy with other projects (among those with my science fiction short film Echoes) I did not pursue the idea of this barbarian short film. Nonetheless I wanted to meet this guy.
I met the wrestler and we came along really well. At one point he asked me:

“Do you have a story that would fit my talents?”

…I had to admit, knowing that I would not do the barbarian story.

Do you have a story that fits my talents?
…It kept circling in the back of my head. I thought that this guy could play a really evil killer and the fallen hero at the same time. And he surely would look impressive on screen, especially in action scenes and when he gets punched and thrown around.

That was how the story and the script for The Ballerina were born.

As soon as I had a bit of spare time I called the wrestler and we met again. This was two weeks ago. I told him about my next short film …and about the Stalker. He liked the concept. And I was really happy that he agreed to play the role! 🙂

So I proudly present you pro wrestler Peter White, who will play the Stalker in my next episode of Shadows of Prey: