As I was posting a lot of children’s book’s illustrations lately, I thought that it would be nice to post something different again. 🙂

May I introduce you to the nymph. She is one of the creatures that were born in my 2014 sketchbook. 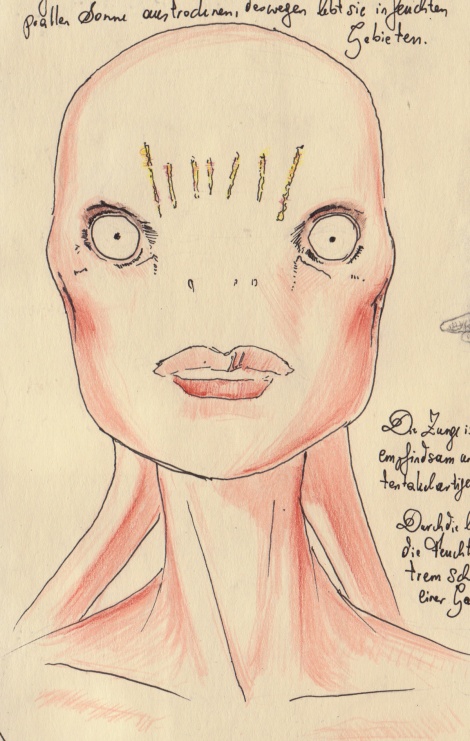 The nymph lives deep in the forests, preferably near a tarn or swamp, as she needs a relatively high air humidity to feel well. As with many other creatures of the woods, it is not advisable to seek out a nymph, or to stay around her for too long. Mainly, because the nymph is a predator.

The nymph has two tail-like appendages growing from the back of her head and a spliced, movable tounge. She is completely hairless and has athletic physique.

Because of her unusual features, she would not resemble the ideal of female beauty – by human means. Nonetheless, because of her animalistic sensuality most humans, males and females alike, won’t be able to withstand her appeal and would follow her deeper into the woods. Once the wanderers would be lured deep enough into the forrest she would hunt them down. Most of the time she would course her prey alone, but there have also been reports of nymphs rushing her victims with the assistance of other creatures of the woods.

Her athletic, gazelle-like legs would allow her to move forward extremely fast – even on rough terrain. In most cases, she would hound her victims until they were completely exhausted and would then strangle them to death. There also have been cases of a nymph seducing her victims first and suffocating them in their sleep. 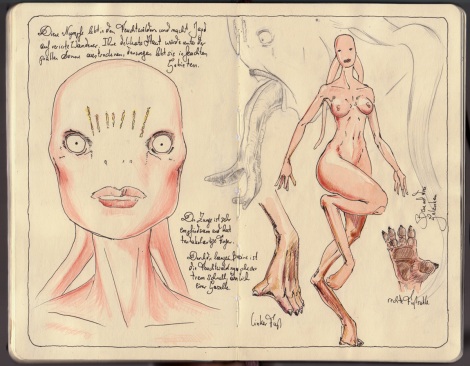 The best thing that could happen to a wanderer if a nymph has it in for him/her is that the human is found by a creature like the Nebomunk early enough. This means, before the nymph’s ban would have gotten too strong. The Nebomunk is a more or less harmless and sometimes helpful spirit of the woods who also frequents the watery parts of European forests.

9 responses to “The Nymph”