On December 18th, Guenther, the owner of the bookstore Bücherturm, asked me if I could bring along some more books to the public reading which would take place later that week (and about which I might write in another blog post).

“Sure”, I said and checked the boxes with the shrink-wraped copies of Below the Floor. Just in case you are new to this blog and are wondering now: Below the Floor is an illustrated fantasy-adventure children’s book. As there were still orders I had to send out to bookstores, I grabbed my list of orders and started packing the boxes for the bookstores. When I was done, I prepared a little box where I could carry 15 to 20 copies of Below the Floor (for Guenther) and took all the books that were left in one of the boxes that had come from the printer. Three books. 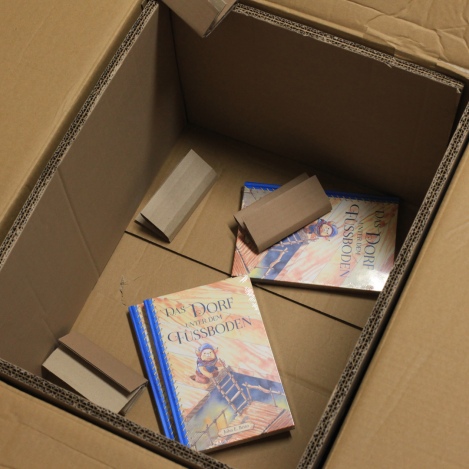 Well, no problem, I thought and grapped the next box. One book.

Ok, I thought and went through the other packets that were left lying around – all of which were suspiciously light. 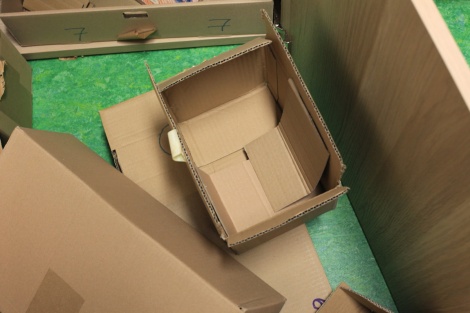 At the end, I found six books for Guenther. I had sold all my books. I was out of stock.

To be honest, at first, I was shocked. Sure, I had been counting on selling a few hands full of books, but I never thought about the option of running out of books – one week before Christmas Eve!

Well, this was a good thing and I was extremely happy and grateful. 😀 But now, I had a problem: I had promised Guenther to bring along more books for his event and I had only six books left! And what should I do if one of the other bookstores ordered more books?

Why did you not order more books beforehand?

When publishing your book yourself you pay all the bills and therefore take all the risks that usually a publisher would take. So if you print boatloads of books and you sell none, you loose a lot of money.

Nonetheless, I had ordered more books from the printing company nearly two months prior, even without knowing if the readers would like my book or not. The problem was that the order had not arrived yet.

In fact, there had been some delays because of issues which had to do with the taxation, as my company is registered in Austria and the printing company’s head office is in Germany. In order to get my books faster, I also had ordered another printing from the same printing company, but this time with different taxation settings. (Long story made short: The difference was that I would loose money on taxes but therefore I was counting on getting faster into production, thus receiving the books faster.)

But the printer seemed to have a huge waiting list for his printing jobs due to Christmas.  Now, looking back, I think that I should have seen this coming. I thought of the parents who might have ordered Below the Floor as a Christmas present for their children and how disappointed (or angry) they would be if the next print did not arrive in time.

In the meantime, the bookstore in Vienna, next to St. Stephen´s Cathedral, called. They needed more books. Ouch! I talked to the manager and told him I was sold out and waiting for more books to come, but I could not guarantee that they would arrive before Christmas. The manager’s reaction was surprising:

Congratulations! That is good. Better being sold out than sitting on piles of unsold books.

I had not seen it that way. And I think he was right. So I thanked him for his understanding and updated the availability status of Below the Floor in the german register of books.

So I just want to say:

Thank you for helping me making this happen. Thank you for your social media shares, thank you for the trust you gave me (by ordering the book) and thank you for recommending my book to your friends. This wouldn’t have been possible without the help of you all. 😀

In the meanwhile the new copies of Below the Floor have arrived and the German version, “Das Dorf unter dem Fuboden”, is available here.