When I wrote the script for The Wendigo Effect, I had an animated science fiction horror movie in mind because I knew that I could never get together the money needed to produce a life action movie. At least not considering the location where The Wendigo Effect takes place.

By now I have come to understand why first time indie movies are always of the same kind: five young people walking into the woods or doing nasty things in an apartment: Young actors are considered cheaper than Tom Cruise. And if you shoot in the woods you do not need to build the corridors of the Death Star. Building a set costs money.

As neither of the two possibilities was an option for me I thought “Let’s make an animated horror movie instead.” And this is where Echoes came into life as a concept test for a full length project.

Now, lots of working hours later and knowing of a lot more mistakes I do not want to do again, I’m sitting here aboard the train that brings me to work, thinking about how to spend the weekends of my next three years. There are too many factors that can go wrong with an animated movie like Echoes. Especially in postproduction.

One option is doing everything in some kind of digital puppet animation style. Sitting in front of my computer, all on my own, minimizing the risks. That’s what FSudol, the creator of City of Rott, did. He worked as an assistant technical director on South Park and then decided to do his own film in his spare time. It took him 3000 working hours within two years. The result was an enjoyable full length animated horror comedy – which I honestly would have never bought if I was not into animation. And horror. And animetd horror movies. See the point? 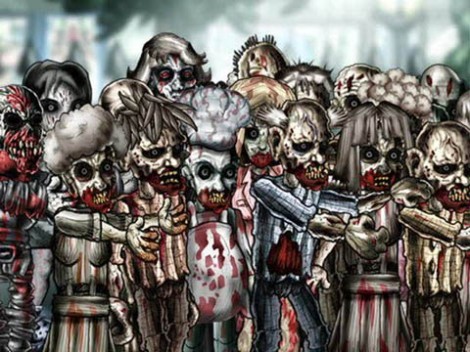 The animation style of City of Rott is very crude, like the animations you know from South Park. It is surely a question of how much time (or money) you can put into creating one second of animation footage. Nonetheless, it was a huge effort from FSudol creating City of Rott, but I’m not sure whether I want to go this route. All the images from today´s post are from this film by the way.

By the way: FSudol did another full length horror film called Dead Fury. I’ll check it out for sure! 🙂

9 responses to “Can an animated horror movie actally work?”